The Skinny on Obesity: What’s the Big Deal?

The Skinny on Obesity: What’s the Big Deal? 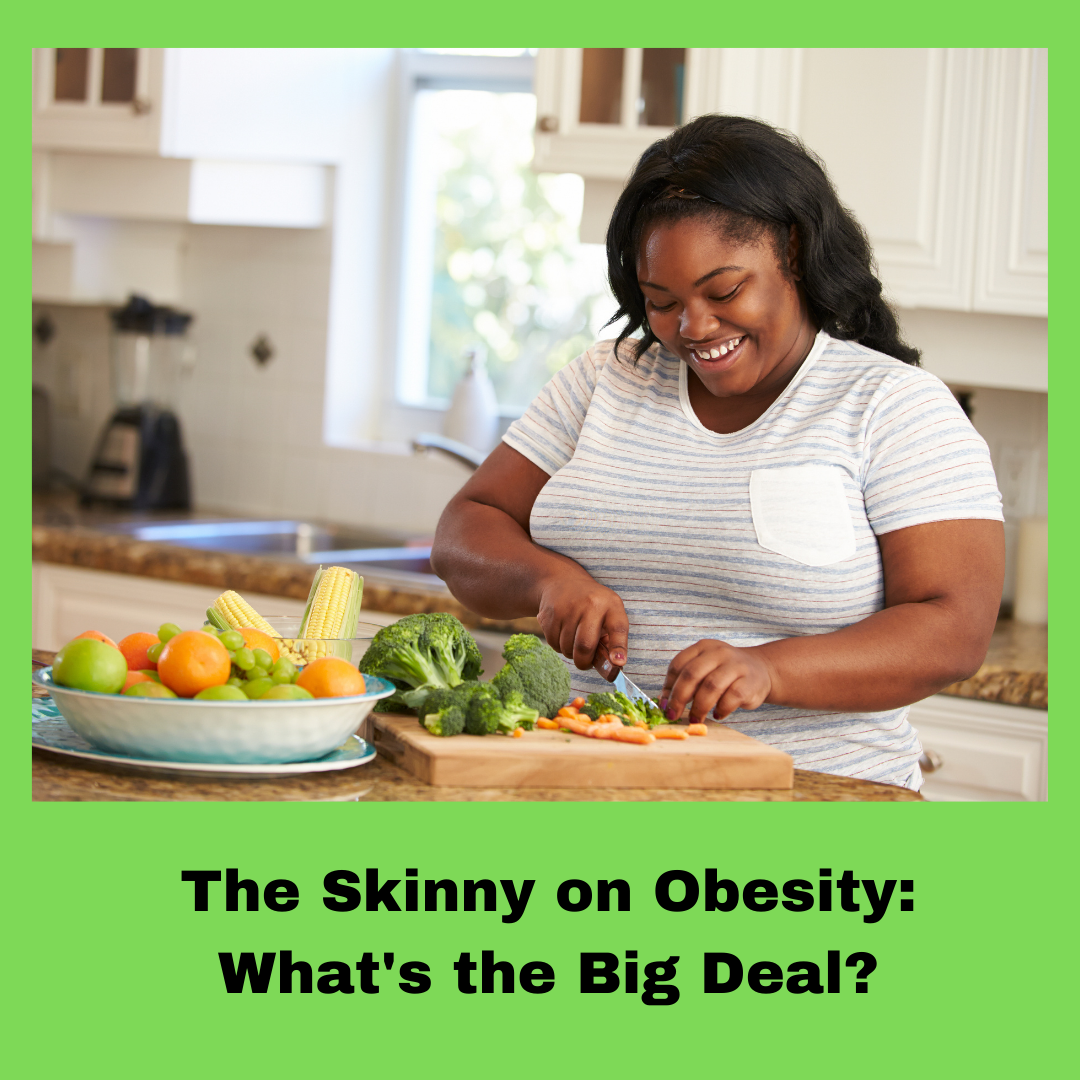 The Skinny on Obesity:

The numbers are staggering. The global prevalence of frank obesity* (or health-damaging excess body weight) has tripled since the mid-1970s to include some 650 million adults and 124 million children and teenagers, with another billion adults being overweight (again as defined by the body mass index (BMI)). Some 90 million adult Americans (42.4% of the adult population) now live with obesity. The prevalence of obesity is higher in the United States than that of other comparable economically developed countries, and the problem is not simply confined to adults with 14% of 2-5 year-olds and 20% of 6-19 year-olds being classified as obese. Worryingly, rates of obesity have increased in all age groups except the youngest children over the past 20 years.

Concepts and beliefs regarding body weight have varied according to culture throughout history and, to some extent at least, those different beliefs continue today.  Although you might think that being overweight and/or obese comes with a society that is too “well off” and has an abundant supply of food at an acceptable cost (and perhaps lacks a sufficient level of routine physical activity – note that I deliberately avoid the word “exercise”), that is not the whole story at all.  Clearly demonstrating this is the fact that obesity rates range from as low as 5% in China, Japan, and some countries in Africa, to as high as 75% in urban Samoa, where a “full” body is regarded as more handsome or beautiful, as well as being an indicator of personal prosperity.

One can also take a look at obesity in Native Americans as an example of cultural and behavioral pattern differences in body weight.  According to government data, over half of American Indian and Alaska Native women are overweight. Additionally, before 10 years of age, 40 percent to 50 percent of American Indian children of many tribal communities are classified as either overweight or obese by modern definitions in contrast to data from a century ago in which Caucasian and Lakota children were equivalent in weight and body mass index. American Indian or Alaska Native adults are 60% more likely to be obese than non-Hispanic Whites. 1 In 2011, Native Hawaiians/Pacific Islanders were 30 percent more likely to be obese than non-Hispanic Whites.

Black Americans tend to characterize obesity in positive terms, seeing it in terms of attractiveness, body, image, strength, self-esteem and social desirability and acceptance. White Americans, on the other hand, see what they regard as “excess” weight as unattractive and socially undesirable, associated with decreased self-esteem and negative body image. In New York City, obesity is epidemic. More than half of adult New Yorkers have overweight (34%) or obesity (22%). Data show that people can have obesity early in life. Nearly half of all elementary school children and Head Start children do not have a healthy weight. In New York City, one in five kindergarten students and one in four Head Start children, have obesity. Getting a bit more specific with regard to East New York (Brooklyn Community District 5, which includes Broadway Junction, City Line, Cypress Hills, East New York, New Lots, Spring Creek, and Starrett City), childhood obesity is at 25% (higher than the NYC rate of 20% and 5 times that of the Financial District).

The concept of body weight and its “ideal” and norms are thus not as simple a subject as they might seem.  Culture can be an important factor in what is considered good, but it may ignore biological and physical truth. As far as obesity itself is concerned, at least in the United States, the insurance industry has played a major role in defining what are average and acceptable weights for American adults as early as in its 1912 weight tables, which were then revised in 1959, when the concept of “average weight” was replaced by “ideal weight” (already judgmental) and obesity was defined as 20% above that level.  Today, the Body Mass Index (see * below) provides more precise, but yet flexible, categorizations of weight from “underweight” to “obese,” but the concept of “best weight,” if there is, in fact, a true ideal for each individual remains the subject of debate.

Having said all this, we must come back to the simple, common-sense fact that too much body weight is not a good thing.  Suppose you weigh 200 pounds and sit on a wooden chair built to support a person weighing 100 pounds. You know what is going to happen.  The chair breaks.  It collapses.  Personal injury may result. Is that the chair’s fault? Or for another example, think about a small car with a 100-horsepower engine pulling a 5,000-pound trailer load.  It won’t work.  The car’s engine overheats and stops.  End of story.

The problem with obesity begins with the physics of weight differences on stresses on engine and the metal connectors, but obesity as a weight problem in the human body is far more complex because it involves not just mechanical force, such as that on the spine or knee joints and heart muscle that pumps blood around the body, but also metabolism.  Thus, the consequences for each of us of carrying around too much body weight have both mechanical and metabolic consequences that spell both sickness and pain – as well as shortened life expectancy.

The specific facts about being obese by the BMI standard are very disturbing.  Obesity is responsible for most cases of Type 2 diabetes; 40% of cardiovascular disease diagnoses; 41% of cancers of the uterus; and more than 10% of cancers of the gallbladder, kidney, liver, and colon cancers.  Currently obesity is a risk factor for serious illness or death from a COVID-19 infection. What is happening with health in East New York today is strongly associated with the overweight/obesity problem. Some data specifically for East New York (Community Board 5 as defined above) are found here: https://www1.nyc.gov/assets/doh/downloads/pdf/data/2015chp-bk5.pdf

All right.  We can agree that there is a problem, but too much body weight and its associated risks are simply not necessary.  Enough talk. What do we do about overweight and obesity?

The last thirty years have seen multiple governmental (such as those of the Centers for Disease Control, Michelle Obama’s “Let’s Move” program and other White House efforts), semi-governmental, and private efforts, including “intensive behavioral therapy,” have tried with limited success to reduce the problem.  The answers are rather simple: ideal weight depends principally on nutrition (“fuel” or calories in the form of nutritionally health foods – generally more fruits and green vegetables) and physical exercise (to burn off calories, tone muscles, promote body flexibility).  Both what we take in (nutrition) and the amount of regular physical activity we do are largely under our own control – although the availability of nutritionally sound foods (especially fresh vegetables) in low-income communities is a real problem and our individual genetics may mean that some of us can lose weight more easily than others.  Of course, there should be no smoking – and careful use of alcohol.

What we have to recognize is that overweight and obesity are not simply problems of eating too much and eating less healthy food and sugary beverages, for example.  Lack of a place to exercise, lack of access to affordable fresh vegetables (for example bodegas outnumber supermarkets 13:1 in East New York) and stress all contribute to the problems, among other problems. In other words, the local environment and our own lifestyle choices contribute to the problem.  We ignore these multiple factors at our peril.  Doing so will cause us to fail. We need a broad approach to fixing the problem – and we can do it TOGETHER.

The community of East New York can, and should, be the one to show the rest of America how to change the weight problem.  Individual efforts can certainly help, but East New York also needs to Rise Up together.  This is what the Rise Up East New York Campaign for Better Health and Quality of Life is all about. TOGETHER, we can beat overweight and obesity and the chronic illnesses and the other health problems (like back and knee joint pain) that come with weight problems.

*  For those who want to know more or understand better, “overweight” and “obesity” are defined by a formula called the “body mass index” or “BMI.” Body mass index is a measure of body fat based on height and weight that applies to adult men and women. It is easy to calculate based on a standard formula readily available on the web. The formula generates a number that tells you whether you are in the healthy, overweight, or obese categories.  Obviously, it is most desirable to be in the healthy range.  The range is defined as follows: Underweight = <18.5; Normal weight = 18.5–24.9; Overweight = 25–29.9; and Obesity = 30 or greater. (www.nhlbi.nih.gov/health/educational/lose_wt/BMI/)