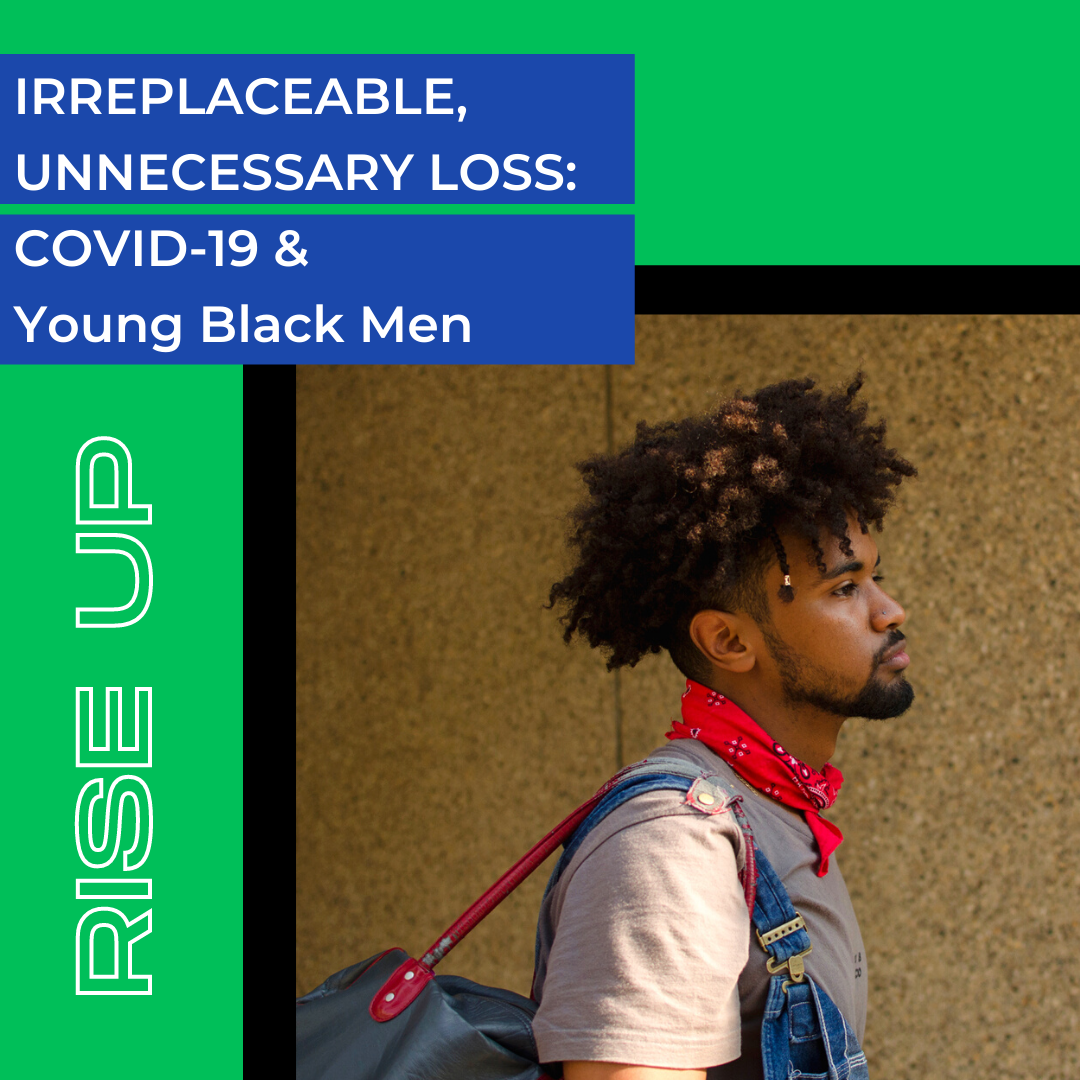 The evidence that the COVID-19 pandemic has hit minority communities harder than it has hit other communities is clear.  Factors that increase the risk of a serious COVID-19 infection and death have been shown indisputably to include low income, race, and pre-existing chronic illnesses, such as obesity, diabetes, hypertension, lung disease, and chronic kidney disease.

What is generally not known is the fact that vigorous, young African-American men (ages 35-44) have been hit especially hard by the COVID-19 virus.  They have been dying, according to one recent study, at a rate nine times that of White men of the same age. When one considers that COVID 19-has killed 1 out of every 800 African Americans and realizes that a disproportionate percentage of these deaths are accounted for by young Black men, it is clear that something must be done to stop what is happening.  But exactly what is happening?  Why should these young, “healthy” men be dying?

It turns out that the effects of the COVID-19 pandemic have exposed a larger, and in its own way, even more disturbing set of facts.  Irrespective of the effects of the COVID-19 pandemic, Black men live shorter lives (by almost five years) than all other Americans — and this disparity in life expectancy did not just happen.  Rather, it has been true for generations.  The life expectancy of Black men did not reach an average of 65 years until 1995, while White men were living into their mid-60s by 1950, allowing them to be receive Medicare benefits long before their Black brothers were eligible to receive these payments.

However, we have just peeled back one more layer of this “onion” of unequal life expectancy and health.  The underlying, long-known difference in life expectancy becomes understandable because it is also the fact that Black people not only have higher rates of obesity, hypertension, diabetes (and therefore strokes), as well as chronic kidney disease, but also develop evidence of these conditions (“chronic illness”) as much as ten years before White people do.

Why is this?  The long-proffered explanations, or really head-in-the-sand neglect, of looking at, and doing something about, this disparity have included a variety of factors, including biological and behavioral differences, lifestyle choices, and lack of personal responsibility, with all of them having proven to be quite false.  The fact is that the true health each of us enjoys (or does not) is a product of all the functions or malfunctions of the society that surrounds us, with traditional medical care only accounting for about 10% of our health status.  Genes are important, but they still only account for another 30%, leaving 60% of our true health to be determined by our lifestyle and environment.

Growing up, and continuing to live in, and cope with, a low-income, poorly-resourced community setting with all the problems (housing, economics, employment, education, learned hopelessness and helplessness and all things that go along with those states), is guaranteed to result in a poorer health state for which biology and genetics themselves alone cannot account.

But let’s get back to the Black male and his shortened life expectancy, as well as increased susceptibility to the COVID-19 virus.  There must be an added ingredient that accounts for this – something that we have missed so far.

The answer is likely to be that the stress of long years of coping with all of the above problems within a larger society that is discriminatory, callused, indifferent and sometimes even openly hostile, where the color of one’s skin can mean denial of a level playing field, plays an important role in increasing one’s susceptibility to viral infections, such as that of COVID-19, but also to the early development of chronic illnesses, including obesity, diabetes, and chronic kidney disease.  Of course, the effects of these two different problems can be additive such that mortality among young Black men in particular is increased – and that is what the data on illness and death in this group show.  Remember, too, that this line of reasoning applies more broadly to the higher death rate in Black Americans of both sexes and all ages (especially older people) that has also been well documented.

Our bodies, of course, all respond to acute stressors with what are basically two systems.  Collectively, they are referred to the “fight or flight” system.  The first component is provided by the nervous system (brain and sympathetic (peripheral) nervous system).  It serves to raise our alertness level including increasing our blood pressure, increasing our breathing rate, and tensing our muscles so that they are prepared for fight or flight. The changes it produces resolve quickly.  The second system involves the secretion of hormones from the pituitary gland located in our skulls and just below the brain and the adrenal gland, which sits on the kidney.  These hormones have a much longer lasting effect on a variety of body functions.  Under normal conditions, these hormones stop being produced as a stress response, but, with repeated activation by stresses around us, they may undergo a permanent activation that is not normal and can result in stress-related disorders.  One component of this abnormal hormone secretion in particular may reduce our bodies’ ability to defend itself against infection (reduce our immunity), as well as promote obesity, and even diabetes.  The repeated and sustained activation can lead to higher levels of blood pressure as well.  The net effect is the weakening of our body’s defenses and therefore increased susceptibility to infections (such as that of COVID-19) and chronic illness patterns that, together, can increase the severity of any infection and a higher death rate.

Duke University epidemiologist Sherman James has ascribed the fact that Black men have the shortest life expectancy of all Americans to what he has called “John Henryism.”  According to the legend (and ballad), John Henry was a steel-driving man who, using a hammer, defeated a steam-powered drill in terms of rock removed while making a railroad tunnel in the early 1800’s.  He won against seemingly overwhelming odds, but he died after winning – with the hammer in his hands.  He has concluded that the Black man of today faces the constant stress of social inequality and structural racism as he endeavors to succeed, with the result that he suffers from stress-related disorders and, therefore, both the early onset of chronic diseases and death.

The bottom line is that the overall health (and life) experience of Black men is not acceptable.  It is one of the things that Rise Up East New York aims to change.  We all need to work together to make that change happen.